This article on React Native assumes previous knowledge on React so there will be concepts that come from React.

Getting Started with React Native

Before you get started: This article on React Native assumes previous knowledge on React so there will be concepts that come from React. While reading please refer to the Demo repository I made previously. Also, read my previous blog on React basics if you need a refresher.

There are React native specific components such as <View> and <Text>. RN is a real mobile app. It also uses hot reloading.

It also gives you the options to go native and inject out Swift/Java should you need. Although most of the time you shouldn’t do it. 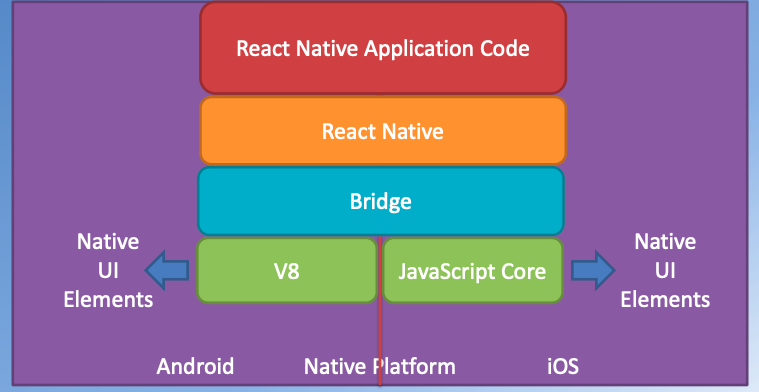 Android has (V8 JS) and iOS (JS core), RN has the bridge that then implements its framework with JS. RN then spits out native code when we are ready to build with the export SDK.

Then, to get everything running you should install Expo at expo.io. Expo will ensure you can test app on mobile straight.

After installation. To start directly with a new expo app use expo init projectName then do expo start. You can also clone the source code repository. Then just do npm install and expo start.

From here, you’ll need to download the mobile app version (either in AppStore or GooglePlay) of Expo and create an account. Once in the Expo app just scan the generated QR code and you’re up and running!.

Similar convention with React but no index.js. App.js also is your entry point.

Also note the inline based styling different from React. StyleSheet is imported from RN like JS to apply styles that you can reuse. RN uses flexbox CSS.

There are some primitive RN elements such as the following: 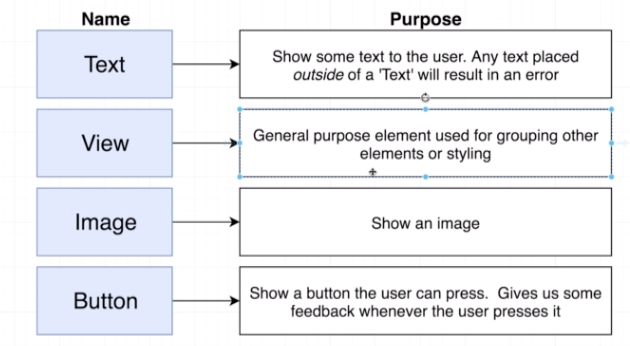 As you follow along don’t forget to download and run the following repo here. Again, if you navigate to App.js, you’ll notice StyleSheet.create, this is optional and you can also pass styles inline just like in React.

You might also notice how when you need to return more than one element you need to wrap it in a single element in this case we can do it in a <View>.

If you check on the repo, you’ll see the <ListScreen> component. There you’ll identify the React Native’s FlatList Element: 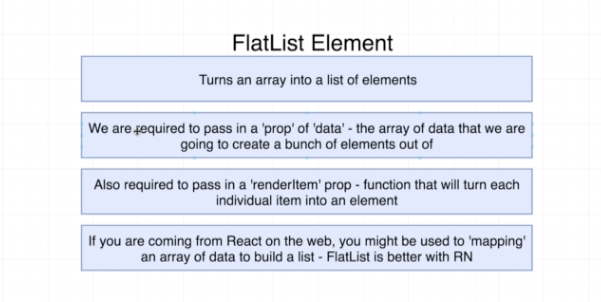 So FlatList does optimizations for you for the mobile world when lists become big. Here the FlatList reminds us just like React that key is important. ‘Keys’ are important when this list is changed, RN will have to rebuild the entire list if we don’t specify the key. Keys optimize and RN will re-render only what it needs.

Extensible and easy-to-use navigation solution. React Native Navigation supports navigational features. We can have common views of a navigational menu, with stack based pages we commonly see on mobile apps.

Note: You might notice the newer version of RN Navigation has different implementation.

Two Types of Buttons for Navigation

We add the text as string and use the onPress attribute. Remember Button element is self-closed. Out of both for navigation we recommend TouchableOpacity element if you need more customization.

We implement navigation on RN with React Navigator. In App.js we see how it uses the createStackNavigator() method. Depending on the version of React Navigator the way you implement it might change.

With props passed by the stackNavigator() we can tell what to show or not on the screen. To access the navigation object you access it by props.navigation. On the included props.navigation.navigate() method we can pass in the screen we defined on App.js and it will render the component we want! It is easy as:

And voilà! This takes us to the basic navigation and UI display with React Native!