We often hear people talking about the three tier architecture for web development…while these tiers often have different languages, there are systems that implement a single language for all tiers

We often hear people talking about the three tier architecture for web development. In this approach, the entire web application is organized into three different layers.

Today, we could have an specialist in one of these layers. 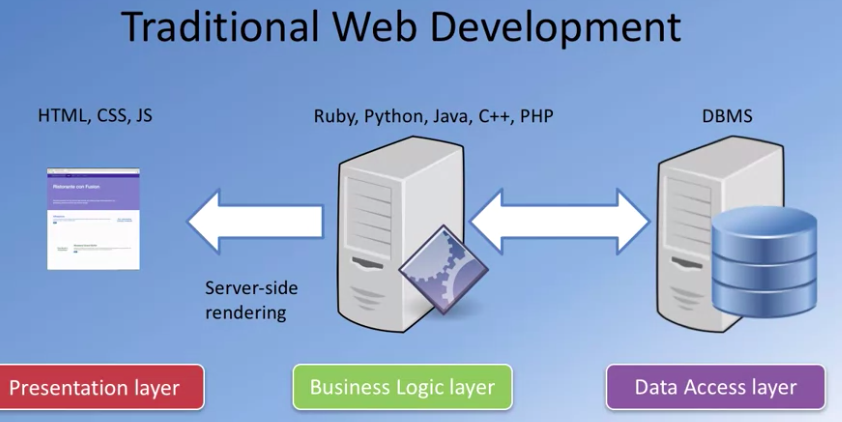 Also, while these tiers often have different languages, there are systems that implement a single language for all tiers.

Typically, in a browser where the user can access the information, and this is where we use technologies like HTML, CSS and JavaScript are used to render content for the user.

This information delivery is managed behind the scenes by a back end support which is typically implemented nowadays using technologies like PHP, Java, ASP.NET, Ruby, Python or Node.

There’s a trend in using one language for all three tiers. This will make one more prone to specialize as full-stack web developer. This is what Javascript tries to do by implementing for example React presentation, Node business logic and MongoDB for data access.

So, you could have the front end implemented as a single page application using frameworks like Angular or React. You have the server side or the business logic layer being implemented using technologies like Node, which is also dependent on JavaScript, and then you have the data storage itself being implemented using technologies like Mongo DB, which stores data in the form of JSON documents. The information exchange between the server-side and the client-side is usually done using JSON as the format, and the server-side supports a REST API endpoint.